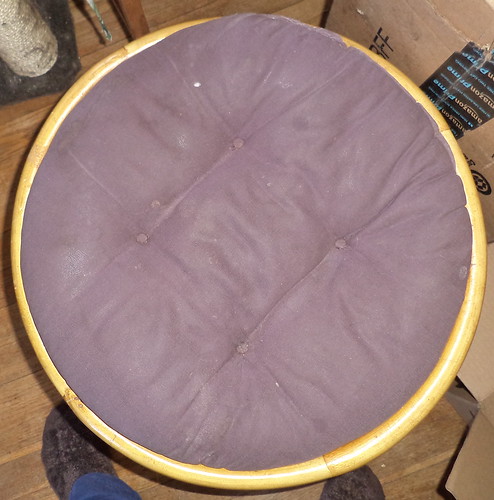 Some things I have had for a long time. Take this footstool and cushion. I think both are in the neighborhood of 15 years old, but they could be older. All the cats who have ever lived in this house have used this as a place to rest, groom, sit and throw up. I used to be able to clean it, but, in early March, Pilchard left a whopper of a hair ball on it during the day while I was at work. When I got home and discovered the item, the whole cushion smelled. Over the years, I'd thought about replacing the cushion but never got around to it. Although I cleaned it off, there was a residual sour smell in the living room. Yeah, got to deal with this.

The footstool was part of a set which included a papasan chair which I bought from Pier 1. I still have the papasan chair but it has cracked and broken joints and currently holds stuff. I also doubt I'd be able to easily get into or out of something like that anymore; might be amusing to see, but incredibly frustrating for me. The footstool is in perfect shape. The only thing needing replacement was the cushion. Off to Pier 1 I went.

In the store, they had a small selection. Most of them were a fuzzy, velour fabric which is NOT suitable for cats. Oh they would probably lay on it, but I was concerned they would also try to groom the cushion. And if someone were to upchuck, I'd be replacing the cushion too soon. I brought the cushion along, looking for a sturdy fabric in a reasonable color. Orange! Teal! Ivory! No. No. And absolutely not. But you can order online and have it delivered to the store and the warehouse had 8 different colors. I settled on this. 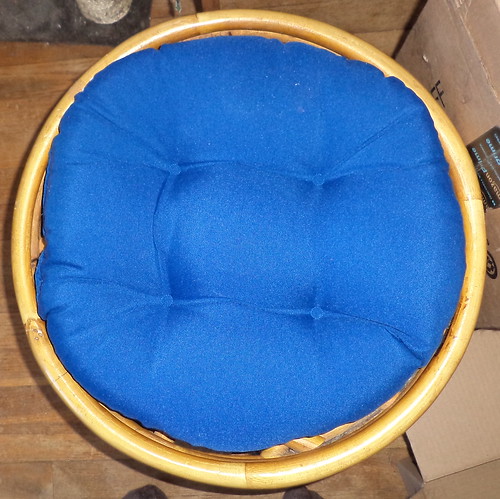 This is my favorite color. The cushion is a tad small for the footstool but I'm thinking the old cushion may have spread after decades of use. It went right into the garbage. There are some things you just don't give away.

Her royal highness likes it. 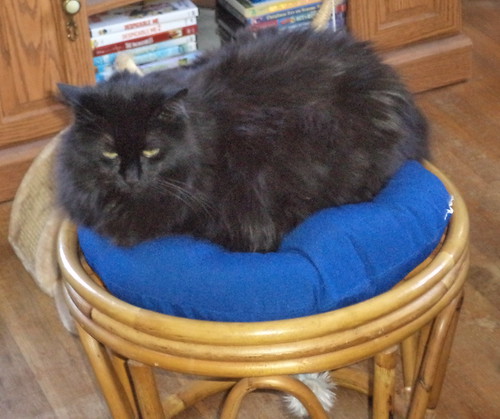 It took her a couple of weeks to get used to the newness of it but I've already combed quite a bit of black hair off the cushion. Mija hasn't used it like she used the old one, but that will come.