The Official End of Summer

I brought in the geraniums today. 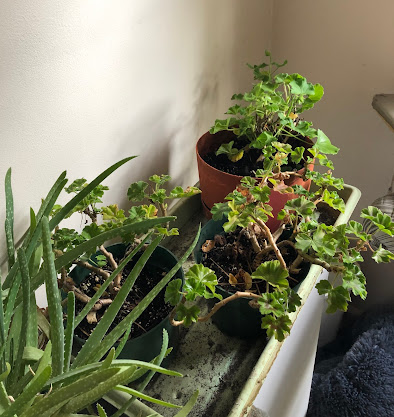 No, I don't remember what colors are here. The one at the back has buds so I'll know when it blooms.

I adore geraniums because they are incredibly sturdy plants. They come in such a wide variety of colors, too. 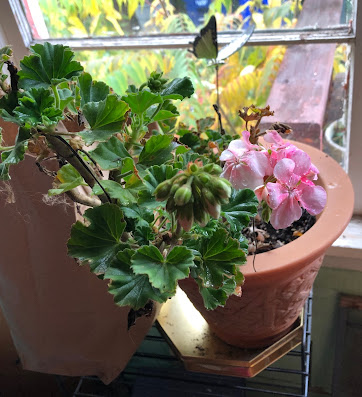 This pink one has been coming in and going out for at least five years; probably longer because I can't exactly remember when I got it. It's quite leggy and is in desperate need of a pruning. I'm going to let it get acclimated to being inside and then I will slowly trim the bracts in half.
Growing up, my dad's father had this red geranium which was six FEET across. It sat in the window seat in his living room, which was a south window. He covered the windows with white gauzy curtains so the light was diffused. That had to help the geranium deal with direct summer sun. It was too big to haul in and out. He just left it there and would water it twice a week.
After he died, my aunts took cuttings and it was tossed out. I can't imagine a geranium would last a long time but we didn't have a place for something that big or I think mom would have claimed it.
So, summer is officially over. We have two more 70 degree days and then it tanks and I will have to wear layers. I was ready to bring the geraniums inside. The morning and most of the afternoon was rainy so they got a good soaking before coming inside. In this dumpster fire of a year, they are a nice reminder that there is beauty if you look.
Beverage:  water
Deb
Posted by Deb Montague at 5:54:00 PM