There is a sign on the northwest side of Chicago, near Albany Park. 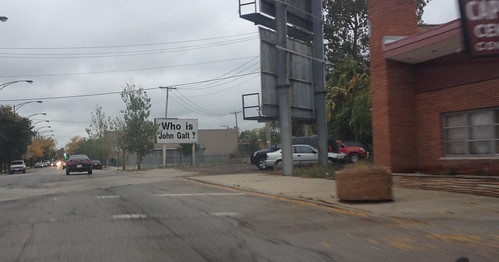 I seem to remember a billboard campaign utilizing this opening line from Ayn Rand's novel, Atlas Shrugged. I have never read that particular book. Rand doesn't interest me. But this tattered billboard has me trying to remember the ad campaign.

It may also have been a reaction by someone with a political motive. Atlas Shrugged has been co-opted by a number of people and used as an example of anti-government writings. Protests against banking institutions; the Tea Party; and Congressman Ron Paul; have all used this phrase, or referenced it.

In my travels, I've seen a lot of vacant billboards along the highway. The churn rate for advertising along Interstates must be rather large. This area of Chicago, while slightly busy in the morning and at night, is not the place urging the protest of government would be effective. It's incredibly easy to miss seeing this. The other billboard you see just off center, also says, "Who is John Galt?" but because that billboard faces the sun, it's very weathered. I wonder who is paying for these or if that detail has been lost to the winds.

Who is John Galt indeed?