The End of Summer

So many photos with stories to tell. It's been quite a summer; quite a year. I'm going to start here and move backwards and probably sideways and maybe forward. One never knows where the road will go.

After last year's washer replacement, I took at look at my other appliances. The refrigerator was probably the next target. The seal around the door had, for years, not been flush with the upper left and right corners. The upper left corner allowed warm air to seep inside, particularly during the summer. It would condense and "rain" occasionally onto the items on the left side. Usually, this happened when you opened the door to reach in for something. When I bought yogurt, it went on the upper left shelf and the tops of the containers were always wet. Mold would, occasionally, grow on the upper right corner of the door because there was a semi-sealed environment with warmth and moisture. I was cleaning the door and the roof at the upper left of the fridge 3-4 times per week.

The lights would short out because of all this moisture. I haven't had an interior light in months. I bought a replacement bulb in the spring, installed it (That was an adventure.) and it lasted 3 weeks before there was a fizzle one day when I opened the door. It was then that I realized there were 2 bulbs in the fridge, one at the front left and one at the back right. Well, I'll get around to replacing both of them.

And the seal at the lower left of the door wasn't flush anymore. Chilly air would seep out, since cold air is heavier than warm air and would cause mold to grow on the bottom corner of the fridge. I didn't see that until this summer when I dropped a bottle of seltzer and it sprayed all over the floor. What's this on the side of my fridge? Ewwwww. 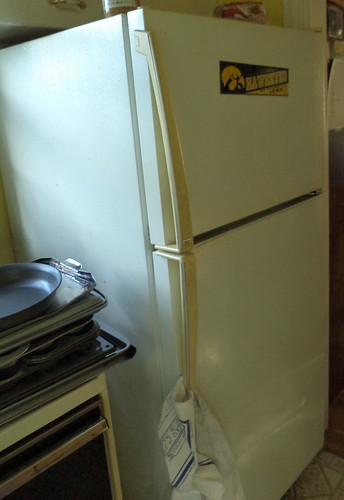 We bought it in 1993. I would say I have gotten my money's worth from it. It wasn't quite level but that's also a product of a 1953-built house and the floor in that location isn't quite level. It has served this family and me well, but it had started to run a lot more than in the past. It was simply dying, albeit slowly, but dying nonetheless.

I'd read where appliances are cheapest at Memorial Day. Also, the time to replace the fridge is before you need it. I intended to buy one over Memorial Day weekend, but life intervened and I didn't have the funds. I limped along. It wasn't quitting on me, just running more and more. That could be chalked up to the loose seal and the summer temperatures and, perhaps, it would stabilize once fall got here. But I kept looking in the event there was some deal which would be too good to pass up. Enter Labor Day. 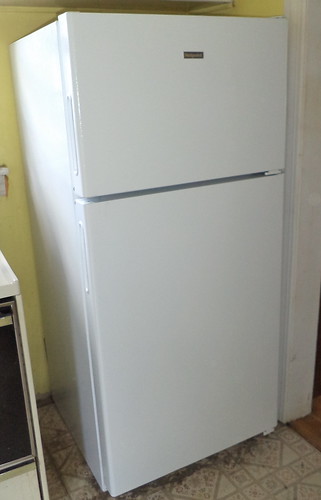 JC Penney, of all places, is starting to sell appliances. They had a Labor Day sale. I compared the above fridge with other places that sell it and Penney's had the best price, including free delivery. I had to pay $15 to haul the old one away. Then, I got an additional 10% off the price because I used my JC Penney card AND because I'm an "exceptional customer" (Not sure why. I don't buy that much stuff from them.) I got 18 months no-interest. As I intend to pay this off by Christmas, or sooner, the no-interest made the whole purchase that much sweeter. It was delivered yesterday.

I couldn't remember whether we brought the old one in the front or the back. They went around back and determined they had to take the old one out the front because it's bigger than the new one. It seems the freezer space is the same, but the fridge space is smaller. Yet, I don't need all that space. When I was cleaning out the old one, I found sour cream way in the back of the fridge with expiration dates of 2012 and 2013. Stuff is less likely to go to the back and be forgotten in the new fridge.

They tried to bring the new one in the back because it's smaller but it just wouldn't fit between the wall for the basement stairs and the corner of the sink. In the process, they bumped the paper towel holder which has a shelf on it and down it came. It turns out the unit, which was wood, had developed a soft spot on the shelf right where the dish soap usually sits. At some point, I would have set a bottle of soap back on the shelf and it would have fallen through. Plus, there was a section of wall behind the unit which had bubbling in the paint. I've scraped that off and ordered a new unit, almost identical to the old unit. I need to paint the rear entry now. Remember when I bought the paint? Um...yeah. It still sits under the kitchen table.

They also knocked off the wall, one of the spice racks I've had for decades. 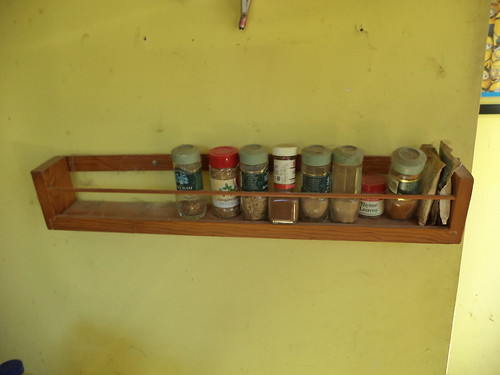 My dad made two of these. Simple construction. I think he made a bunch to sell at flea markets, too. This one was held up by one screw in the middle of the unit. The two screws on the end didn't work anymore. The unit which fell was above this. I have a smaller unit on the wall next to the microwave. It was the template dad used to make these two units which are almost twice as long.

I don't use spices much anymore. I don't cook much anymore. Yesterday, after the guys left and I was putting things back, I looked at the spices off the rack that fell. Some of them had Eagle grocery store price labels on them. I don't remember when Eagle left Chicagoland, but they haven't been here in a very long time. Some of the spices had no scent. Some were discolored. Some were hardened.

I knew I needed to replace spices. There are recommendations to replace some every 6 months, but there is a part of me that screams, "Money down the drain!" whenever I'd look at these. Quite a few were purchased for one or two recipes and never used again. These bay leaves aren't even green. 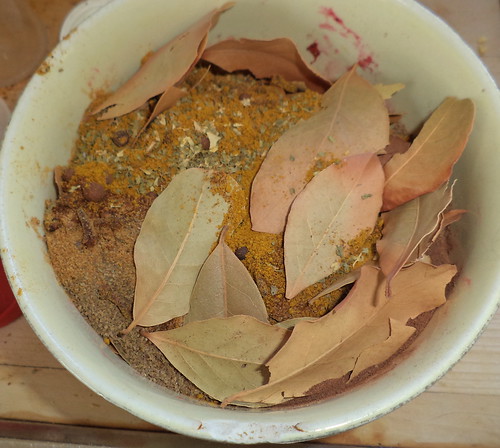 I had an unopened bottle of curry powder. "Best used by 4-20-02." I don't remember the last time I made curry. I love the smell of curry and turmeric, particularly when cooked. The last spice I bought was in July and it was ground cloves. It's to keep the cats out of the house plants. They don't like the smell of cloves.

Looking over all of these, I decided part of tidying up is to critically assess household staples. If I haven't used allspice in 25+ years, why am I holding onto a tin of it, a tin with rusted edges? I had some berries which needed to go to the compost pile. I would dump the old spices into the bowl, haul the bowl to the compost pile and I'd have the best smelling compost pile in the neighborhood. 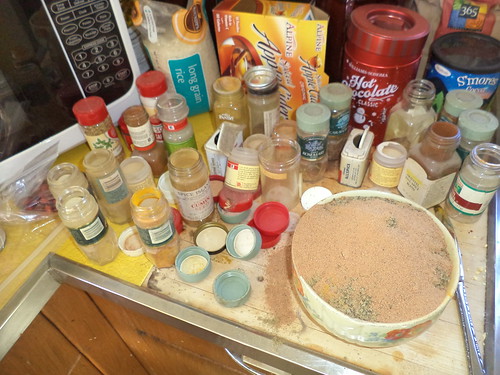 All the plastic, glass and metal containers and their lids have gone into the recycling can. I have, currently, 6 spices on the rack next to the microwave. I want to move that rack. It's never been in a great position. I took down the one rack left and will add them to the recycling can. They are wood, after all. I found a rack I liked on Amazon and it's going where the wood ones were. Then I will take down the one that's on the wall by the microwave. So I have to walk a few steps for the cinnamon. It will be more convenient in the long run.

The last thing to do is sort through all the stuff that was on top of the fridge and was on the kitchen table. I moved all of it to a table in the office. The kitchen table was tipped up on an edge to make room for the movement of fridges. 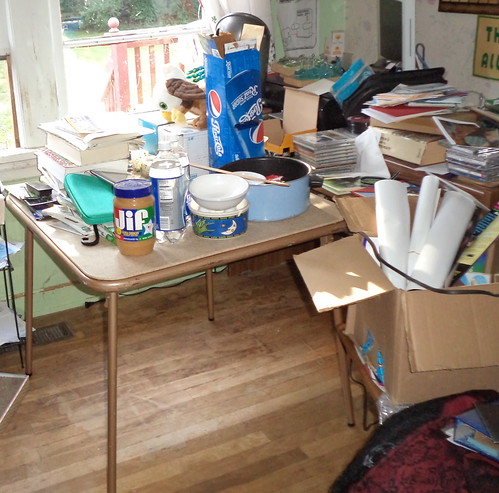 Unfortunately, this room has become something of a dumping ground. I have stacks and piles of things to look through and make decisions on. I walk in with every intention of doing a little bit, get overwhelmed and walk out. I tell myself to just pick one pile and sort through it. I can't find my note cards to write letters to friends. They are somewhere in here.

I've cleared off half of this table. I had a lot of magnets on the old fridge. I'm not sure I want to put them back. With the new fridge being shorter, I can now, easily, reach the cabinets above it. That Dutch Oven on the table, can go back into the cupboard. Cat dishes will still be on top of the fridge and I keep my peanut butter on top of the fridge. It's my go-to meal when I'm too tired to cook.

I watched them take away the old fridge. It occurs to me the only appliance I have left from when I was married is the stove. That doesn't seem like it's having problems. The oven still heats to temp and the burners still come on and heat evenly. It was purchased in 1991. I thought, "Well, I should replace that next year", but, realistically, do I need to? It's not giving me problems.

So, summer ends with a new appliance. Heading into fall, this is a good thing. I would hate to have to figure out the fridge doesn't go through the back door when it's 15 degrees out.