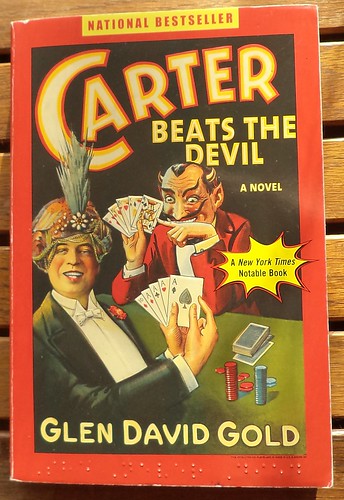 Contemporary fiction is a lukewarm experience for me. I know there are great writers out there, but my previous forays into the world of current fiction had been less than rewarding. There's so much old stuff I haven't read. Why read something new?

WDCB used to have what they called "A Two-Minute Review". In 2 minutes, they would offer opinions on books or movies in the theaters or on video. I bought this book after hearing one of those reviews. It's been in the stack for quite some time. So far this year, I've read humor, fantasy, history, non-fiction and children's books. It was time to read fiction.

This is a good book. I see why I bought it. It's based on the life of Charles Carter, an early 20th century magician. The author weaves historical facts into his fiction. He takes the death of Warren G. Harding, while in San Francisco, and creates an engaging story of misdirection, suspense and magic. A thumping good story based on historical fact. Yes, that is my kind of book.

Gold did a huge amount of research into early magicians, what tricks they performed and how they did them. Harry Houdini shows up. There is the early disapproval of parents who weren't quite San Francisco elite. There is love lost and found. A dogged Secret Service agent comes into play. And the birth of television is set against the roaring 1920's.

It took me a couple weeks to read the book. It's not quite a 'can't put down' but close. There are periods of expository, to set up the next major event in Carter's life. Misdrection abounded. Just when I thought I'd figured something out, it was revealed as not the way I expected it to be. This is in keeping with the subject matter, a master illusionist. There's a lion and an elephant and the ability to make the rich and powerful disappear. I knew of the suspicion surrounding Harding's death; that it has long been alluded his wife poisoned him in retaliation for his numerous affairs. How that is resolved at the end of the book will leave you wondering.

I liked Gold's taking a framework of facts; Charles Carter, San Francisco magician; Warren Harding's death; the advent of television; the change from vaudeville to movies, among other things; and crafting a work of fiction within this framework. The novel held my interest from beginning to end and with the wrapping up of the various story threads, I felt magic was through the whole book. At the end, nothing felt unresolved.

As spring yields to summer, lists start appearing of 'beach books', those books you take on vacation. If you're looking for an addition to your list, I recommend this one. It's available in both paperback and ebook, for those of you who read your books electronically.